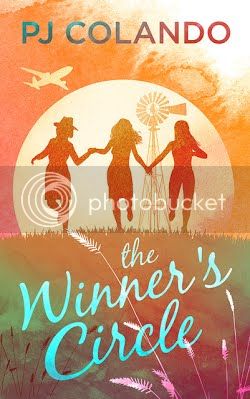 Life in rural small town can dull the senses. A trio of gal pals—mired in middle age, Middle America, and other people’s problems—long to escape.

When Bonnie wins the Boffo Lotto, her circle of friends urge her to lawyer up, invest, and sequester herself.

But secrets are inconceivable in small towns, so Bonnie and Carl invite close friends to witness their Vegas wedding and honeymoon in Hawaii with endless vagabond beyond. The sky’s the limit!

The allure of travel is fun for a while—hilarious, in fact. But when the husbands are jailed, wanderlust is no longer a romp and things get complicated when you’re halfway ‘round the world, untethered from all you know and love.

Life has its consequences… and there’s no place like home.

PJ Colando was born and raised in the Midwest, yet aspired for adventure elsewhere, following her parents’ model. She lives in southern California with her family, hobbies, and pets.
PJ writes comedy and satire with a literary bent. She is the author of three previous novels, with short stories, personal essays, and articles published in journals, magazines, and anthologies. Follow her on her blog on her website: pjcolando.com

In a kingdom in turmoil, people only care for riches and power. As a war breaks out between countries, a godly power is awakening.

Two boys train at the Academy to become Knights of Valor. Best friends, one is filled with light while the other leans towards darkness.

They both have the power to change the world - or destroy it - in their battle for what they believe is right.

I am the author of Albert: Killer In The Woods and many more. I love to write horror novels and short stories as well. I live in Powell Wyoming with my fiancee and two kids.

In the small town of Thunder Bay, 2002, Angelika Juris becomes unexpectedly linked to her guardian angel, Gavin, after a suspicious near-death experience. While trying to figure out the complicated nature of their connection, they uncover a plot so disturbing, it threatens to shift the delicate balance between life and death and eradicate the precious human gift of free will.

When her sister goes missing, Angelika must search the unforgiving terrain of the Rocky Mountains, with her guardian angel as her guide. But they find more than just her sister—a   familiar face, Renner Scholz—and a secret lab teeming with his ongoing, unhindered experiments, including the most powerful of his offspring—the triplets.

Now, Angelika must find a way to free her sister from her evil captors, along with a newfound love interest—Anthony—Renner's only normal son. Will they be able to thwart Renner's malevolent schemes and escape with their lives, or will they suffer the same fate as so many of his previous victims?

Lanie Mores enjoys travelling to alternate realities, often found with her head buried in a book, binge watching Netflix, or playing video games. Although fantasy and science fiction are her obsession, she enjoys most forms of literature, and has been writing poetry since she was a wee bairn.

She has worn many hats throughout her life: cashier, medical records secretary, psychotherapist, hypnotherapist, personal trainer, and most importantly, mom. Her son is the moon of her life, her sun and stars, and she would do anything for him…destroy Terminators sent from a future realm, deflect an Unforgivable curse with her motherly love, and travel through the Upside Down to find him, even if she had to face the Demogorgon himself.

Inspired to write by Stephen King, Diana Gabaldon, Jean M. Auel and Margaret Atwood, she has big shoes to fill, but has always been a huge dreamer and has the determination to aim higher than the stars. GUARDIAN OF ANGEL is the second novel she has written and published, book 2 in the FATHER OF CONTENTION series.

As I lay trapped inside this quiet realm,

My soul adrift, my body earthbound,

A magical book guards my flight,

Will it keep me safe till morning's light?

It begins with darkness. Are they dead, or trapped inside a horrible dream? No one can hear them, see them. Has the world forgotten them? Are they invisible? Not to the Soul Collector. They have stepped into her Kingdom, and she is waiting for them.

LAURA DALEO is the author of five books. She is best known for her storytelling of the vampiric persuasion. Her most recent work, The Vampire Within, is the third book in her Immortal Kiss series. The series is an interesting twist on the Egyptian pantheon being the original vampires. Her current project, The Doll, is her first horror tale, with a touch of mystery. She lives in sunny San Diego, California, with her three dogs, Stuart, Morgan, and Dexter.

The line between passion and obsession runs through us all.

Eva Florez knew he would the moment she saw him.

Gabe Adams didn’t want anything to do with celebrities.

But after Gabe’s sister sells his photos of Levi with a young starlet to a tabloid website, their lives become intertwined forever, bound by rage and retribution.

Blending the nuance and insight of literary fiction with the big-screen magic of a Hollywood thriller, Focus Lost whisks readers into a world of temptation, indulgence, and revenge, daring them to take a bite of the forbidden fruit.

Doug Cooper is the author of the award-winning novels Outside In and The Investment Club and 2019 thriller Focus Lost. Always searching, he has traveled to over twenty-five countries on five continents, exploring the contradictions between what we believe and how we act in the pursuit of truth, beauty, and love.

Gwen Nielson is a gamer and she’s damn proud of it. Her mother may be a former beauty queen and her kid sister may participate in every pageant the state of Colorado has to offer, but Gwen is content to stay at home and play on her Xbox. To her, life isn’t about fashion and make-up; it’s about making a difference and keeping a low profile. And while most of the girls at her high school hang out at the local country club vying for the popular boys’ attention, Gwen is cool with having a boyfriend she’s never met. Pete is a fellow online gamer who lives in California. He’s funny and sweet, and his father owns a gaming company, which is an added bonus because Gwen gets to test out new games before they’re released to the public.

When Pete mails a new game for her to beta test, Gwen patiently awaits its arrival, but the package is never delivered. To make matters worse, when she calls to let Pete know, she discovers that he’s at the hospital after succumbing to a mysterious illness. Hours later, an ambulance arrives next door because her neighbor’s youngest son, Ben, suddenly becomes ill too. His parents and doctors aren’t sure why he has slipped into a coma, but when Gwen finds her opened package in Ben’s bedroom, she begins to suspect that the game is responsible for both of the boys’ eerily similar conditions.

Even to Gwen, the idea of a game making people sick sounds absurd, so she decides to test her theory before going to her parents. Unfortunately, her neighbor’s older brother, Ryan, insists on checking out the game with her. That’s when they discover that the disc isn’t a game at all—it’s actually a portal to a high-tech government simulator named Eve 2.0 who’s programmed to trap players until they can complete all of the timed objectives.

With her top-notched gaming skills, Gwen is a formidable opponent, but she quickly begins to realize that playing a game versus living it is a lot harder than she ever imagined. And as the objectives become more difficult and the four kids are forced to work as a team, Gwen concedes that she may not be as good as she needs to be, which just might end up costing her not only her own life, but Pete, Ryan, and Ben’s too.

Winter lives in the moment and loves nothing more than being surrounded by her family, her fur-babies, and a ton of great reads! When she doesn't have her nose stuck in a book, she's usually thinking up far away, fantastical worlds or she's cooking up a storm in the kitchen!

Because of her love for all things literary, Winter pursued a Master of Arts degree in English Literature and Creative Writing. Professionally, she is a manuscript editor and, in her spare time, she enjoys hosting author spotlights, posting book reviews, and teaching creative writing workshops.

In her private time, she is an avid reader of science fiction, fantasy, and paranormal romances, and one day she hopes to inspire young readers in the same way her favorite authors continue to inspire her today.